During the German occupation Stanisław and Katarzyna Gwizdak lived in Łańcut in the house located between the Sobieski square and the Zamkowastreet. They brought up seven children from whom the eldest daughter Józefa (Nov. 29, 1920 – Oct. 7, 2001), after the round-up in Rzeszów in 1941, was deported to Germany for work and another daughter Zofia (May 3, 1923 – Nov. 24, 2009) was deported to work in Austria in December 1942. Five children Mieczysław (Aug. 9, 1924 – Apr. 26, 1997), Tadeusz (Mar. 3, 1928 – Sept. 1, 1997), Władysława (born on Feb. 15, 1931), Józef (born on Feb. 17, 1933) and Kazimierz (born on May 14, 1938) remained with parents in the house. The bakery run by Stanisław Gwizdak in the place of residence provided maintenance for such a numerous family. At night in the late autumn of 1942 Szmuel (Szymek) Zak and Naftali Berliner, the fugitives from the transport to Bełżec, came to the Gwizdak family. Szymek was a brush maker coming from Kalisz, a good friend of Stanisław from pre-war times. Before coming to the Gwizdak family the Jews stayed in the ghetto in Rzeszów and they risked escape from the rail transport. Stanisław hid them in the hiding place arranged under the stairs. At the end of 1942 and in early spring of 1943, Tadeusz Gwizdak brought next young Jews from the Rzeszów ghetto: Stanisław Lordenbaum and Juliusz Goldfarb. They arrived to Łańcut under cover of night, going through empty fields stretching between the main road and railway tracks. After admitting the third Jew the dug-out was prepared under the building and it was entered next to the baking oven, through a hole masked with wood and various junk. At night the Jews could go out outside the building from side of the Zamkowa street and they remained in hiding during the day. In November 1943 the Gwizdak family was transferred to the building at the Market Square in which the ironware shop was located. In the new place the first action was to prepare the dug-out under the building to hide tenants. After dark the Jews were transported to the new flat on carts in flour bags among other household appliances. The hideout was very dangerous and the hidden Jews had no longer the possibility to go out and they just walked around in the flat at nights.

In February 1944 the next fugitives from the Rzeszów ghetto arrived to the Gwizdak family: Jecheskiel Klajnmint and his brother-in-law Eliasz Fisz. From their arrival the German police began to conduct searches even with use of sniffer dogs. The Gwizdaks had to explain why Katarzyna cooked so much food. And Stanisław Gwizdak was threatened with arresting because of baking additional bread for the hidden Jews he consumed more flour than it resulted from settlement of bread coupons. From that reason he was forced to hide in the village at his wife’s family from late spring 1944 to the end the war. Tadeusz was also interrogated and beaten at the Gestapo. He was rescued by the Polish navy-blue policeman who, in the absence of the German, opened the back door of the station and ordered him to escape. It was already at the end of the war. Bogusław Gwizdak, son of Tadeusz wrote in 2010:

After the second or third search the German appeared in the house with the order to deport the entire family to the camp, probably to Auschwitz. The grandma bribed him with all the valuables possessed in the house and he removed the family from the list. Grandmother repeatedly talked that the family survived the war only with the help of the Lord to whom she always ardently prayed.

All Jews to whom the Gwizdak family provided shelter, survived. After the war they emigrated to the USA, Argentina and Israel.

On Jan. 28, 1980 Stanisław and Katarzyna Gwizdak and their son Tadeusz, upon application of Jecheskiel Klajnmint, were awarded the medal of the “Righteous Among the Nations”. 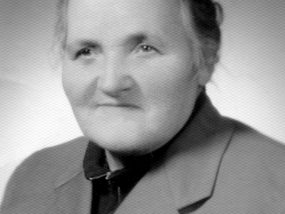 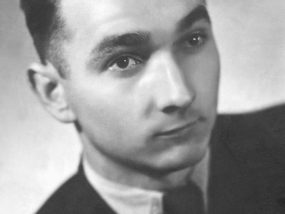 The house in Łańcut where the Gwizdak family hid Jews until November 1943. The photo taken from the side of the Zamkowa street. Photo Bogusław Gwizdak (2011).